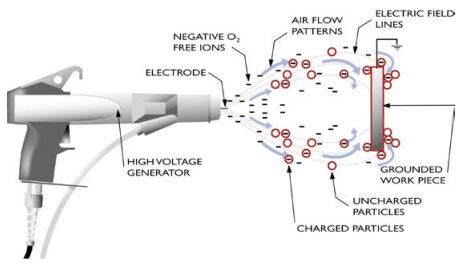 Several forces act on the moving particle to deliver and deposit it on the part: air resistance, aerodynamic force, electric force, and gravity. Importantly electric force can only complete its function if the product substrate is properly grounded.

Attractive forces are inversely proportional to the square of the target distance.

The charge developed by a powder particle is a function of the charge to mass ratio. This ratio is inversely proportional to the radius of a particle. Larger particles charge less efficently. A (one) 1 mil particle has 1/512th the mass of an 8 mil particle, but the total volume of smaller particles making up that mass will carry 8 times the charge due to the increased surface area.

Current limiting devices were developed to help minimize back ionization and are particularly suited for automatic guns where constant adjustments are impractical. As the air space between the gun and part decreases, the resistance also decreases, therefore the current increases proportionately. With a higher current, more and faster free-ions are generated. Higher current causes the part to reach saturation and back-ionization making it more difficult to build film and coat recess. These devices assist in reducing Faraday cage effects and help maintain optimum field strength and gun current between the electrode and parts.

The ability of powder particles to develop a charge while passing through a corona field is governed by Pauthenier’s equation.

The amount of charge is directly proportional to the field strength geometry and the square of the particle radius. It is also affected by the particle and the amount of time in the charge zone.